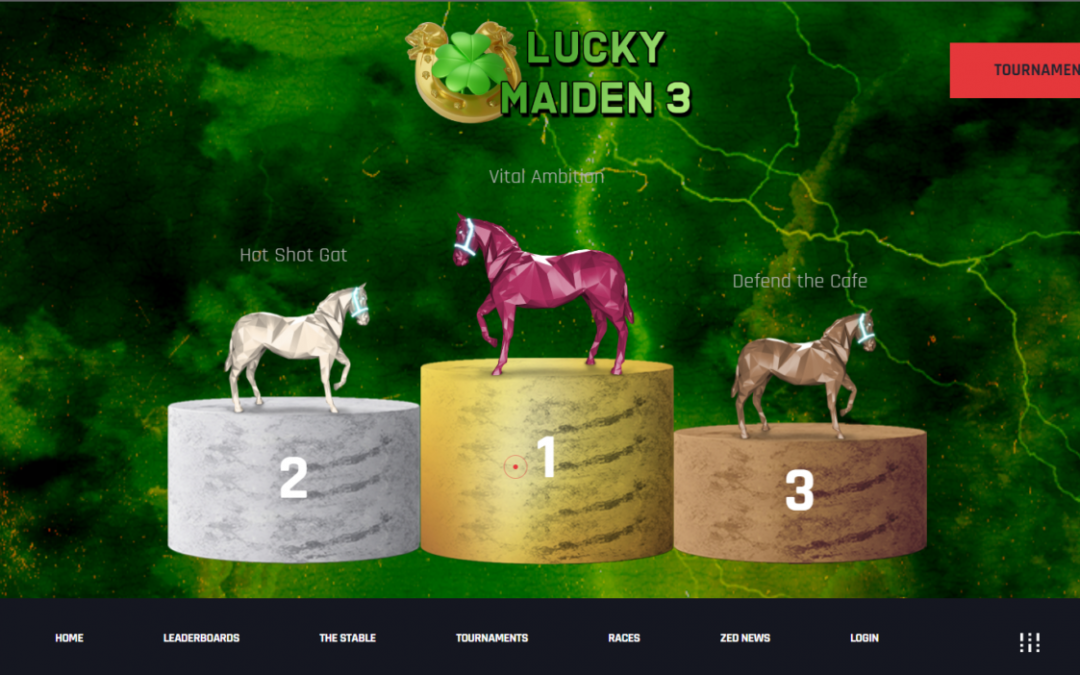 One of our biggest breeding focuses since the update of the breeding algo has been the creation of our “Vital Bloodline”.
A mix of Nakamoto and Szabo genes, we have bred down from the Genesis level experimenting and building through the breed types as we look to create some high Z monsters.

In June we reached the Cross level with the Z18 colt “Vital Ambition” and his first foray in to racing was the Lucky Jack Maiden 3.
Our main target for the tournament was the “Best Cross” title and over an exciting 5 day tournament Vital went on to win that category.

Below is a recap of Vital Ambition’s tournament or CLICK HERE to learn more about the breed process for this line first.

Day 1.
Amongst some of the toughest Maiden fields we’ve seen in a while Vital managed two 2nd places and two 3rd places maintaining a 100% flame rate against many lower Z horses.
Ending round 1 with 100 points and form of 7 – 0/2/2.

Day 2.
On the second day of qualifying Vital really put it together finishing his time in discovery with a 1st and two 2nd’s.
He then entered class 2 with two 3rd places, a 4th place and a dub, racking up 128 points for the day with form of 7 – 2/2/2.
He continued to maintain a 100% flame rate in the higher class proving he could definitely mix it up in C2.

Day 3.
After a scorching performance on day 2 Vital began day 3 with a final race in class 2.
He flamed, picked up 2nd place and in turn moved up to class 1.
To be honest we were unsure if he could continue his form in Zed’s premier class and though he flamed in his first run he only managed a 6th place.
However he fought on and before we knew it he picked up two 2nd places both with flames.
C1 is no place for the faint hearted though and he finished the round with mid pack finishes – 6th, 5th and a 6th with flames.
By the days end he had picked up another 88 points and was still in the hunt, sitting at 4th place amongst Cross bred horses.

Day 4.
Looking back at day 3 we realised the C1 fields had been somewhat softer than usual as the conditional tournaments had been on and many of the C1 beasts had been occupied elsewhere.
Day 4 was going to be a lot tougher as they returned to their stomping ground.

Vital began with a 7th place and we feared our hope of winning Best Cross was slipping away.
With LJ’s F1 scoring system a 4th and a 5th brought in some much needed points but an 8th followed.
Next a 5th, then another and then a 6th, our 100% flame rate seemed a distant memory as we slowly accumulated much needed points.
With such tough C1 fields that day we figured other Cross horses would also be fighting for their lives like we were but would that 8th place finish have ruined our chances?
Fortunately our worry was over when Vital decided that tough fields or not, flames or not he was going to end the qualifying rounds with a C1 win beating out a field of Legendary Nak’s and Szabo’s to finish as the 3rd highest Cross in qualifying, easily making the Grand Final. 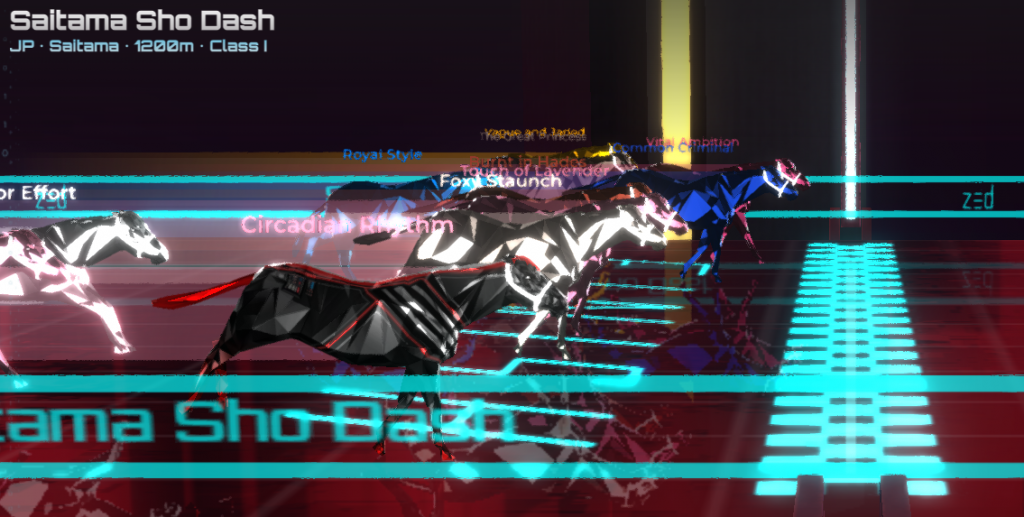 Races started at 2600m and progress down to the shorter distances.
2600m – We didn’t expect much at 2600m and ran 8th place.
2200m – Another long distance race and this time a surprising 5th, not bad points wise. 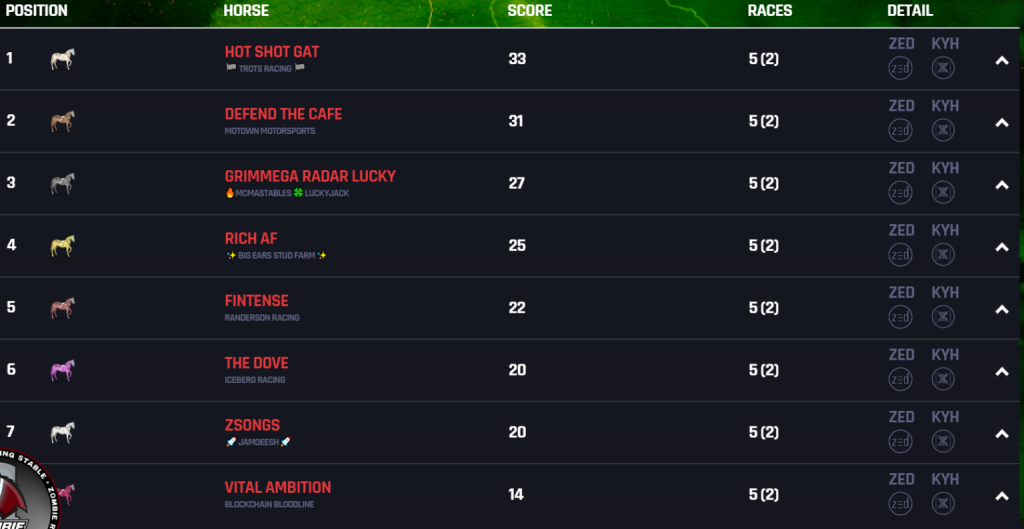 1800m – The base ability we have been injecting in to Vital showed through here as it turned out to be enough to help us pick up a 2nd place at mid distance.

With that 2nd place we were in the box seat.
We were moving up the table and had the two sprint distances left, both of which we were flaming in.
But things don’t always go to plan and we finished in 4th place at 1400m.
Even worse we finished behind “Hot Shot Gat” in 3rd who had been accumulating podiums and points and was sitting in first place.

With one race to go we needed a dub.
Vital had finished qualifying with a dub against a tough C1 field…..Surely he could do it again here.
So we needed a first but we also needed hot Shot Gat to finish in the bottom half of the field for us to take the title.

I stood in front of our PC with my Daughter as the horses lined up for the final race and Vital didn’t let us down.
We cheered him home as he dominated the race taking first place easily.

BUT WAIT….where did Hot Shot Gat finish?
She finished 7th, was it enough?

We refreshed the leader board and it had us in 1st place but it was a tie!
We were both on 69 points, however in the event of a tie it comes down to who finished higher in the final race and with that win Vital had done the business.
Vital Ambition takes “Best Cross” in the Lucky Jack Maiden 3!! (Watch the final race CLICK HERE) 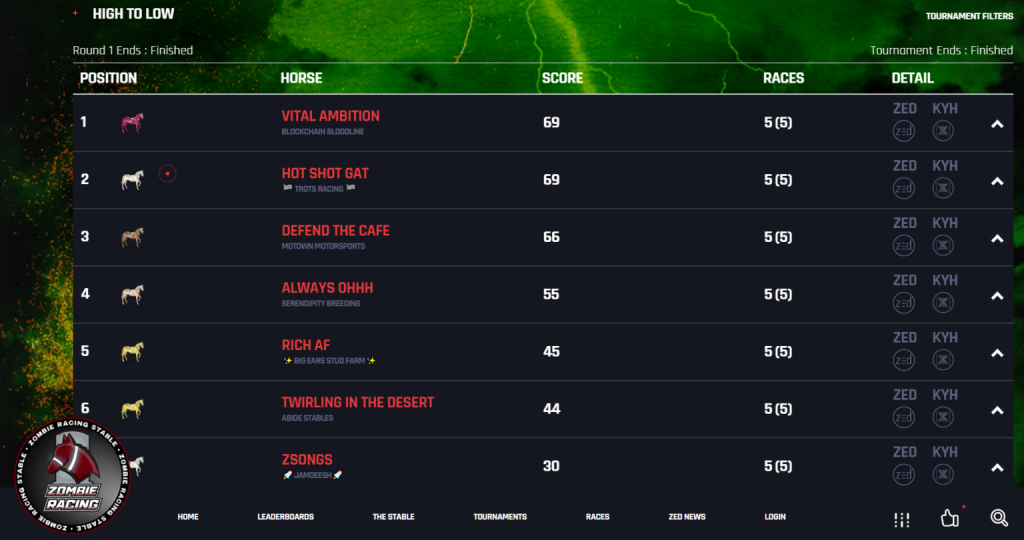 We had a blast, gained some confidence in the lineage we are working on and picked up some eth to put toward a new horse.
We will continue to build out this line on a path to creating some monster high Z Crosses and Pacers.
You can follow that progress in our breeding updates CLICK HERE

Lastly we had an absolute blast in the tournament and would like to thank LJ, Zombie Racing and Co for putting these tournaments on. (Follow LJ on Twitter for more tournaments CLICK HERE)
We will see you all at the LJ Maiden 4!