The Zed Token is upon us 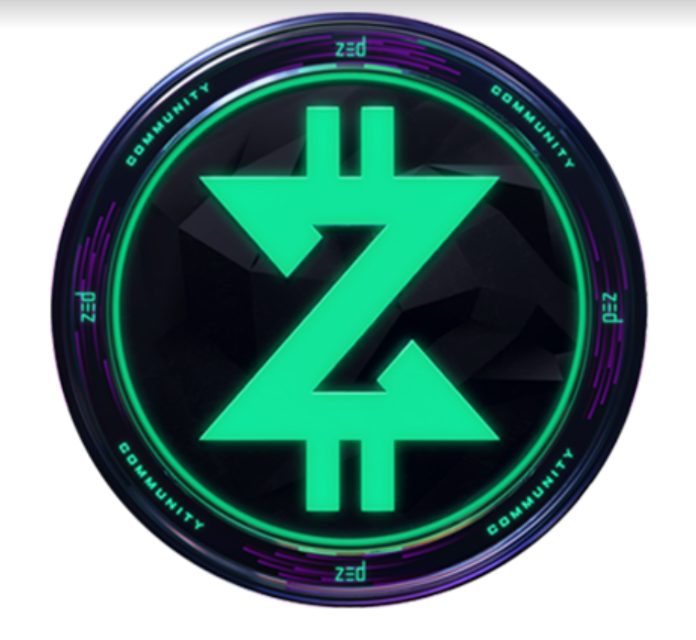 Well fellow Novus Earth trainers, jockeys and speculators the Zed Token is well and truly upon us.
The token whitepaper was released yesterday and it looks well thought through, which of course is exactly what we wanted.
The stand out items for me are the “Play And Earn Rewards Treasury” which accounts for a massive 34% of token supply for prizes and incentives and the “Eco System Fund” that’s accessed via a community application process.
What a fire that will light when it comes to community growth and participation.
More on that as we go over some items in the paper including some price guestimates and how they affect the rewards treasury.
If you’re a Zed geek like me it’s pretty exciting stuff.

So to dig in the Zed Token is an ERC20 token on ETH and Polygon as expected.
It’s confirmed the token will become the sole currency in Zed with a gradual phase out of Weth over time.
I was very happy to see we have a capped supply which is a total of 1,000,000,000 (One billion) tokens.
There are some well-balanced lock up periods for everyone, stagnating the release of the full supply over 4 years.
This excludes current users who will receive 7% of supply unlocked on day one of token generation.

Of note in their introduction is that Zed Token is intended to be used across other “Play And Earn” games.
Potential utility outside of the Zed ecosystem is an exciting thought for token demand and in turn price.
Also exciting is the mention of using the token to incentivise participation in the eco system, they have set aside a rather large war chest for us and the ways to use it are only limited by our imagination!
Below is the some of the introduction which can be viewed in full at the official site www.zedtoken.com 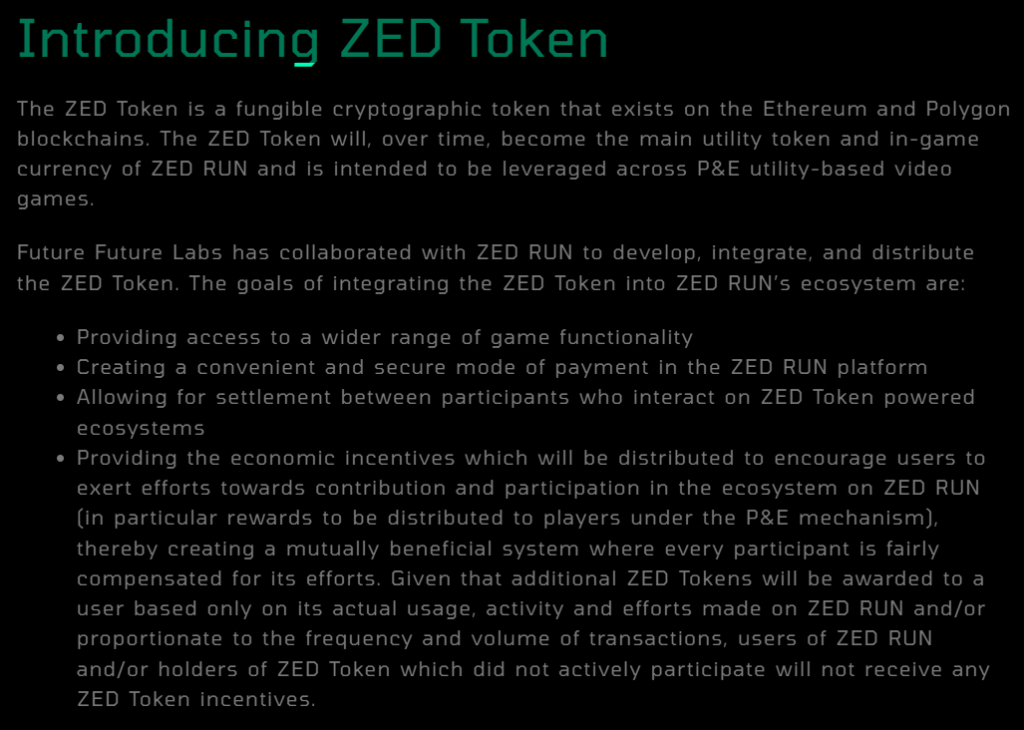 There was mention of some governance features for users and I imagine that is maybe designed as part of the application process for content creators etc looking to access the ecosystem fund for tournaments or things like that.
Pretty cool really.
Unless I have it wrong we could see say Zook putting in a proposal for $10,000 in Zed Token for a Xmas Szabo tournament and we can vote on the proposal.

There wasn’t much info on the voting process but below is the mention in the white paper: 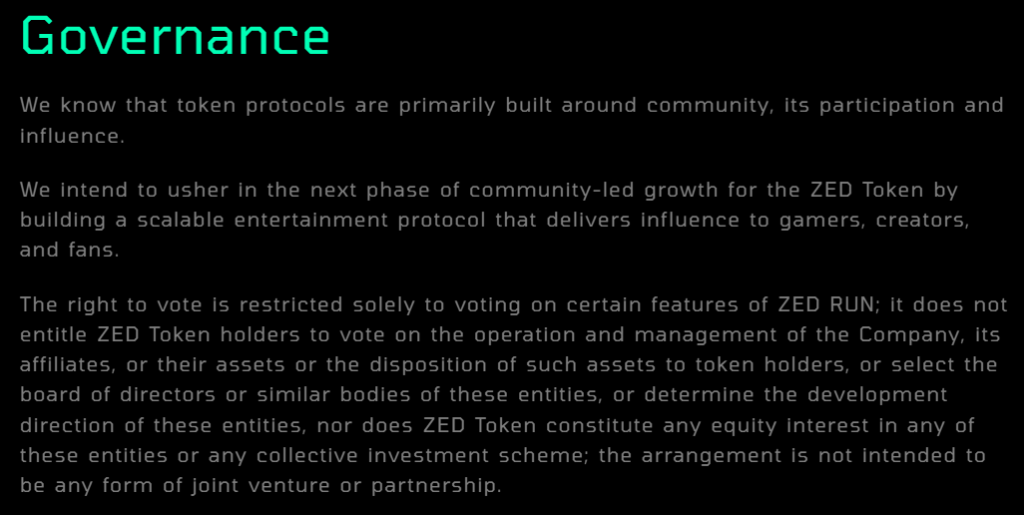 There was however some detail on the application process which you can see below.
Doing a quick estimate of price and under favourable circumstances that could equate to $100,000,000 or more over 4 years.
Can you imagine the growth of numbers off the back of what our community could do with that money?
Perhaps the million dollar maiden tournament I’ve imagined isn’t that far away huh?

You can check out what the paper says about the proposal process below:

The next big section in the paper was a breakdown of the tokenomics.
My key takeaway is they have kept the community and growth of the game front and centre and that translates in to some exciting numbers.
Between the rewards treasury, the existing user air drop and the ecosystem fund we have about 51% going back in to the game and a 15% token treasury and liquidity pool too.
I’ll look at what I believe the price will be further in to the article but this is likely to be very serious money.

Looking over the token release schedule and we have a nice slow bleed.
Our 3 biggest concerns are;
The dumping of the token by former or unhappy players but I don’t think that would be heavy enough downward pressure to affect the price when the token’s utility gathers force.
Unlike so many projects in the crypto space the Zed Token has strong utility from day one and that cannot be ignored as a big plus nor will it be by investors and speculators.
Then we have the team and the existing backers with a total of 30%.
I would hope the growth of the game is high when supported by the reward treasury and ecosystem fund which in turn will drive enough new player growth and token demand to absorb these tokens coming to market.
The 24 months certainly allows for enough time for that to happen.

You can see the full release schedule and distribution breakdown below: 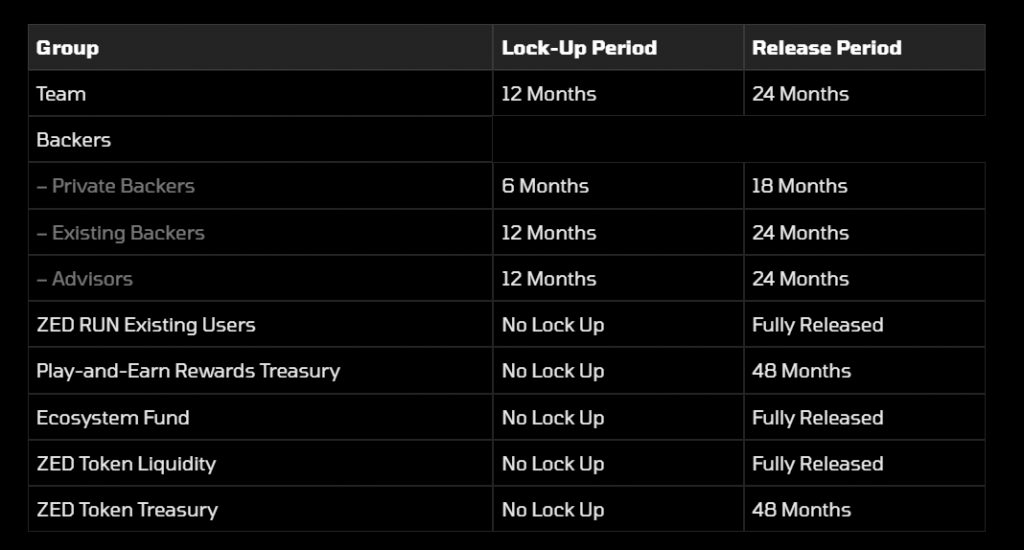 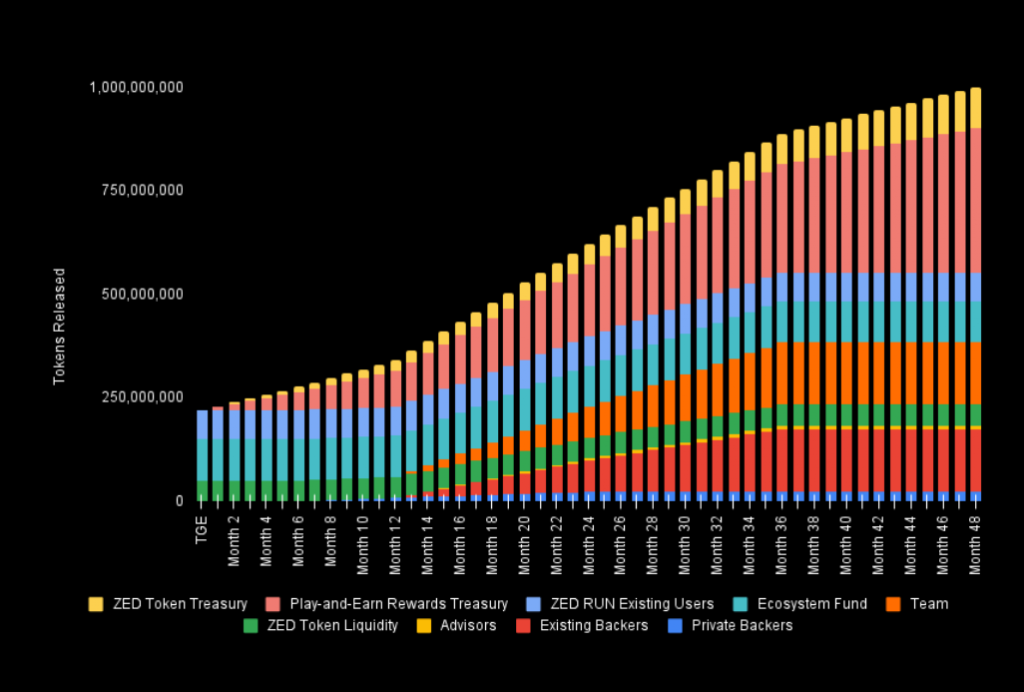 The next section of the paper looked at the ecosystem allocation which included the highly sought after details about eligibility for the token air drop!
It was always going to be difficult to make everyone happy but I think they have done a good job here rewarding both those that play a lot and those that invested a lot in to prestigious horses.
The exact calculations are yet to be released but the balance is about 1 third ownership rewards to two thirds participation rewards.
Perhaps a further reward for Genesis holders could have been included but there are other things that can be worked on later to add further value to Genesis horses.
I believe the Zed team know the Genesis horse is the heart of this game and will ensure they always hold value. (Hey Zed team wink wink)

Below is a look at the ecosystem allocations: 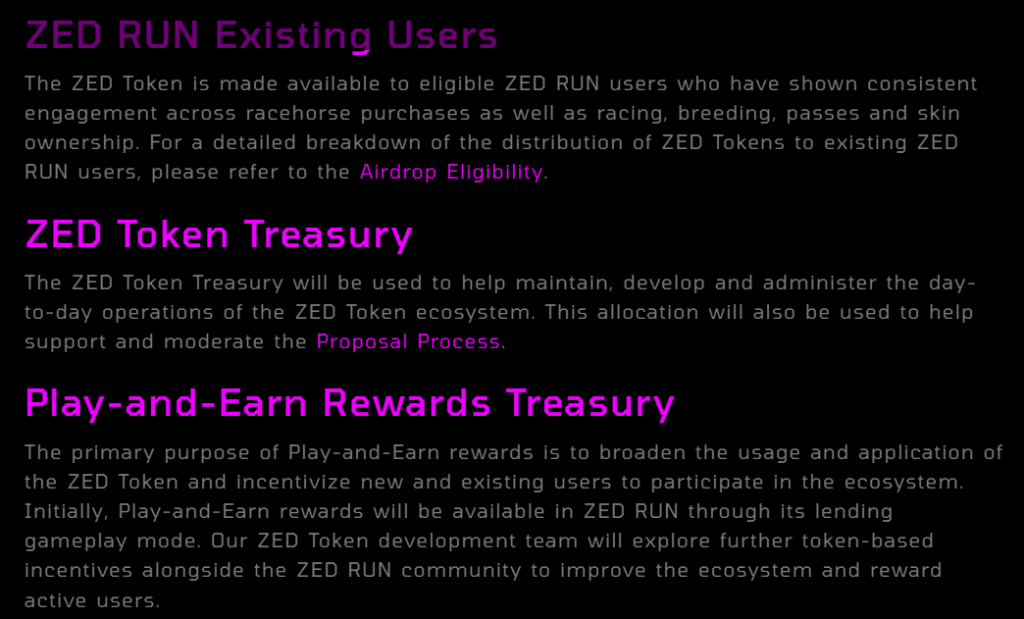 The snapshot for the airdrop was based on ownership of racehorses, the rarity of your race horses, the amount of racing and breeding done and in some cases the holding of particular passes.
A snapshot was taken on June the first and an automated process will calculate the amount of tokens we are eligible for.
The team have said they will be covering gas costs for the air drop too which I thought was a nice gesture.
As yet we don’t have a date for when players can claim there Zed Token but I get the feeling it is any moment now.
Perhaps before I even finish this article.

Below is a look at the weighting for the token allocation but if you want more details you can find a lot more on the Zed Token website.

All in all I’m impressed with the whitepaper.
Ive been a little nervous about the way they would structure the Zed token economy but now that Ive seen the details I think a token is going to revolutionise the game.
But what about the price you ask…How much will your tokens be worth?

No one really knows the answer to that yet but I’m happy to dabble in a bit of not financial advice speculation.
It’s a guessing game but we should be able to get within the ball park if we base our prediction on market cap and circulating supply.

It’s been a minute since I kept an eye on the crypto market as a whole but my thinking is Zed Token has to be at least a top 100 coin pretty quickly if that’s not where it starts.
In fact I would go as far as saying it will be top 60 pretty quickly, it’s the number one game on Polygon, in fact it’s the number one blockchain game and leader in the space.
Then there is the monumental partnerships, the extremely passionate community and a team that I believe in.
One could argue it could reach much higher than 60th spot but then again there are some that would say it wont reach the top 100.
We shall see.

Not to let my speculation get too out of control but if we see a value of $1.00 a token the combined value of the “Token Rewards Treasury” and “Ecosystem Fund” would be $440,000,000!
Who isn’t coming to Novus Earth to race digital horses with that sort of money floating around.

I could be way off the mark with my price guestimations but dare to dream.
Whatever the price of the Zed Token I think we are about to enter a new chapter on Novus earth and I couldn’t be more excited.
Bullish on the future of Zed.

See you on the track my friends.
Happy racing.

– Self promotion.
Blockchain Bloodline will be having a 1.0 UUU lotto ticket sale to celebrate the token release.
We are bullish on Zed Run and in turn the token so we will be selling over 15 foals and only accepting Zed Token for the sale.
We will also be giving one horse away free too so keep an eye on our Twitter page for info.