The dilemma of unraced Genesis horses in 2.0. 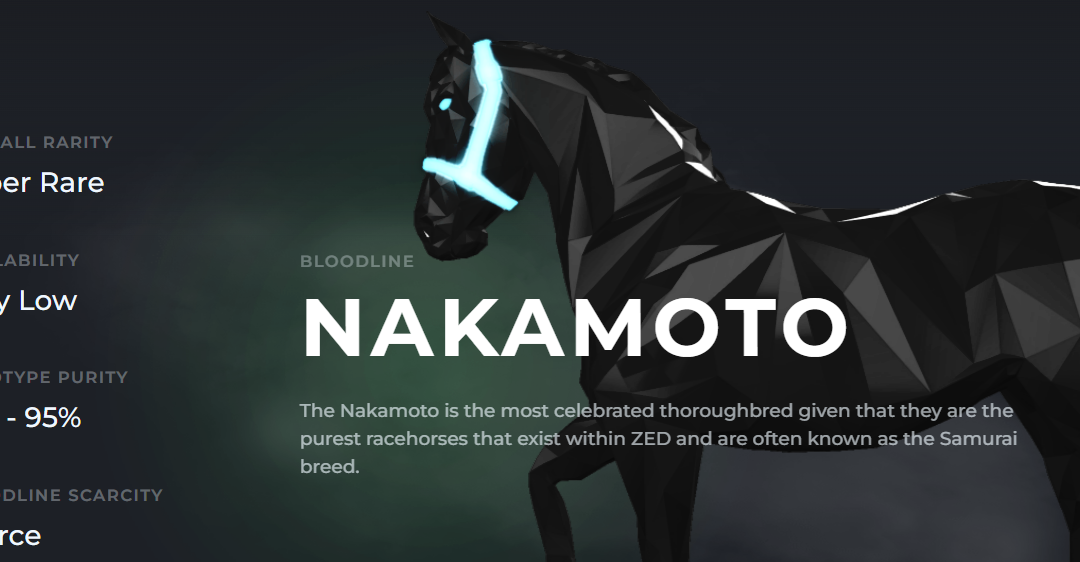 When I first arrived on Novus Earth the most coveted addition you could add to your stable was an unraced Z1 Genesis Nakamoto.
In fact any unraced Genesis was a trophy horse.

Over time our stable was able to secure an unraced Z1 breeding pair along with an unraced Z4 Szabo stallion.
And it wasn’t just any Z1 pair!
Our Z1 stallion “Pinnacle” was the father of “Solid” who is the second highest earning horse in the game and our Z1 Mare “Alacazam” had an offspring chart that showed amazing breeding pedigree.
They were both premium unraced breeders in 1.0.

Our intention at the time was to keep these horse’s as unraced breeding stock.
Unwrapped as coveted Genesis trophy horses.
They were and still remain, the core of our stable.

Each month we were able to stud Pinnacle out for quite a nice price.
We would sell 2 covers which would fund the creation of our own Z2 Legendary foal.
At that time a Z2 Legendary Nakamoto was the best horse you could breed and your best shot at a C1 paid killer.

With the introduction of breeding 2.0 the landscape changed.
With the more logical direction of the algorithm a raced Genesis was now more desirable for breeding purposes than one that was unraced.
It’s record on the track became a very important factor.

For those with unraced Genesis horses, particularly those with high value Genesis horses a cross roads had arrived.
To race a horse or keep it unraced?
Success on the track and the value of the horse would sky rocket.
Failure and your sitting at floor.
For us this was a decision that had to be taken slowly.
I won’t mention the figure we paid for our two Z1 horses but I will say for us it was a large sum of money.

For other stables it seemed like the decision was a no brainer.
The number of unraced Gennie’s began to shrink as more and more hit the track.
As of today Hawku tells me there are 377 Z1 horses left unraced of the original 2,000 created, so roughly about 18%.

With all that in mind we feel our best move going forward is to keep our Z1’s unraced.
The risk of value loss if they don’t perform on the track is too great despite the potential upside.
Besides that, scarcity holds value in itself and over time that 18% will continue to decline.
Holding 2 of the remaining 5% of unraced Z1’s will certainly have a different ring too it when that time comes.

Though our decision to keep these horses unraced may leave unrealised value on the table in the short term I think it’s the smarter longer term play for a stable in our position.
Yes the change has impacted our ability to charge what we believe Pinnacle is worth in stud but on the flipside it has also allowed us to breed with him and our other Genesis horses at very cheap inhouse prices.
Though it would be easier to breed if I knew the exact DP and Variance of each of them it’s not imperative to our breeding efforts.

This brings me to the last item of consideration when it comes to unraced horses in 2.0.
Can their traits and racing ability be reverse engineered using the race data of their foals?
If it can, then won’t the remaining unraced horses just be the worst of the rest?

My theory here is that some data can definitely be gained by looking at foal stats.
We’ve seen several cases of stables buying successful racers by looking at the data of their foals.
However we’ve also seen cases of the theory going the other way.
I can’t recall the name but Z1 racing had a Z1 Nak that he and many others thought was going to be the next monster.
It wasn’t.
There is certainly still a grey area around racing and breeding talent that I think allows for some horses to be great racers but average or poor breeders and vice versa.

From our experience in 2.0 I have been able to use foal data to work out the distance funnel of all of our unraced Genesis horses.
I also have rough ideas of other traits they hold which is very handy for our breeding efforts.
Do I know if they are good racers though? In a word no.
I have some exciting suspicions but for now at least they will remain just that.
Our Z1’s will be staying shacked up in the breeding barn.
For the foreseeable future anyway.

That said I am getting closer and closer to testing out our Z4 “Posh Omen”.
More on that later.

Thanks for reading guys.