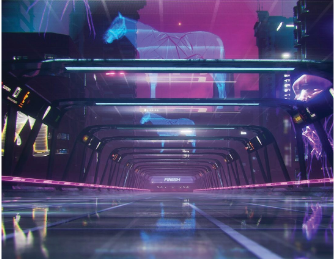 Good morning digital jockey’s of the world.
Welcome back to another breeding update and what a month it has been on the breeding front.
The new breeding algorithm sure changed the landscape and along with it so did our breeding and stable strategy.

As we know Zed Run is a game in “beta” and it has and will change as it grows in to its final form.
Stables must be able to pivot when needed and this month was certainly a case of that.
Luckily we had this mindset from early on and the horses in our stable to maneuver as needed.

It has been a little over a month since the change and we have learnt a few things but still also have many unanswered questions that look like taking quite some time and experimentation to answer.
One thing is for sure though, the new changes have certainly made the breeding aspect of Zed Run much more logical.
In turn we have seen proven blood become more valuable which is a major plus for the game.
Strategy, patience and selective breeding at any level of the game should now rewarded with upward momentum and luck plays less of a part.

From our breeding so far and from watching what others have done it appears that base ability and distance preference are traits that can be passed down through breeding somewhat predictably.
For example breeding 2 sprinters together will on balance create a foal that is also a sprinter and if both parents are specialists at 1200m then the foal likely will be too.

Our first breed under the changed system demonstrated this.
As mentioned last month we arranged a foal deal with Retro Racing and combined our mare “She’s Sensational” with the stallion “Legally Challenged”.
Both successful C1 sprinters and in turn we bred a C1 sprinter colt we named “Vital Sign” who has already become an ROI positive horse qualifying for the finals of 3 tournaments already. (1 QF/1 SF/ 1 Final)

Initially we started carefully with our breeding strategy but got caught up in the excitement of things and went on to breed around 14 foals.
4 of these were to gauge the quality of the breeds of our unraced Genesis horses but quite a few were purely experimental.

We mixed a number of cheap high distance preference studs with some Z2’s of ours.
We mixed low Z# with high Z# and all sorts of other test breeds.
Some successful and some that we will send to pasture when that time comes.

The learning curve continues but it seems as though the long term play now is stacking traits and building lineages.
Ironically this is close to what we imagined breeding in Zed was in our early days of the game and are quite excited for it to have become this way now.

We can stack distance preference at the expense of base ability degradation which we can then inject further down the tree using our Z1’s and other high BA horses.
During the process, for some lineages, we will also try to add high variance and in some we will attempt to eliminate variance.

It’s yet to be seen so far but I’m told not only are parents passing down genes, so are the grandparents and potentially the other ancestors too and as such we are starting our lineages from scratch.
Our experiments have shown that once you move further down the Z chain the traits are less reliably passed down and so to have full control we need to select each member of the family tree purposefully.
In cases where we bred with outside studs that had a bunch of very different ancestors we were unable to replicate the distance preference even if the parents were very similar.

This led us to sell a couple of horses that don’t fit our strategy and the money was re-invested in to horses that are more suitable to our plans.
The most exciting being “Unyielding Mallon” (Legendary Z5) who is a foal of the great breeder “Unyielding” and the infamous racer “Ducky Mallon”. 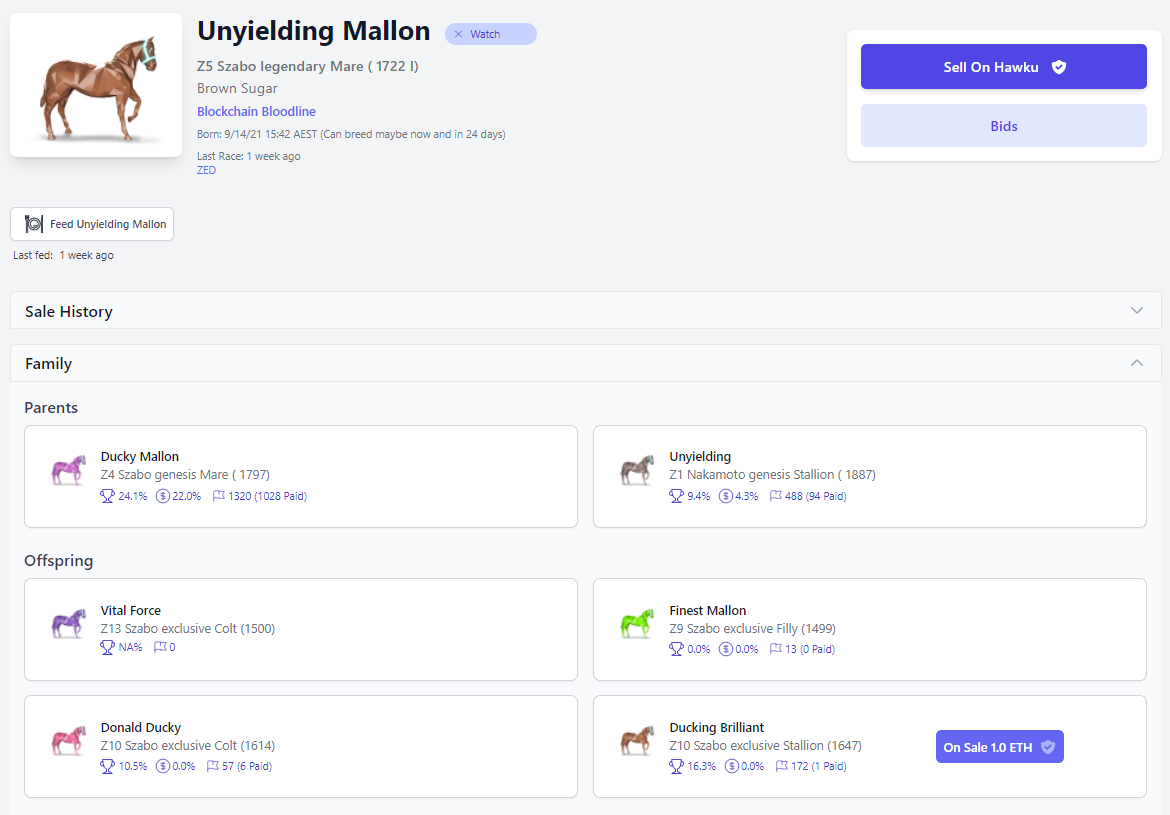 So moving forward our first serious lineages have begun.
A Szabo line and various Nakamoto lines.

Szabo line:
Having already progressed from Genesis to Legendary in “Vital Sign” we combined him with “Unyielding Mallon” to create “Vital Force”. (Z13 Exclusive)
We hope this combination retains the sprinting talents and distance preference of the parents and grandparents while potentially seeing some of Ducky Mallon’s extreme variance pop up.

We will race Vital Force in next weeks Zed maiden tournament and Lucky Jacks maiden tournament and expect to see that the base ability is not quite high enough to compete at the top level.
From there we will breed him with our special Z1 mare “Alacazam”.
After that we will evaluate what we have produced and decide what traits we require for the next cycle.

Nakamoto line:
At this stage we have a Z1 breeding pair and 9 Legendary Nakamoto’s. (5 female/4 male)
Plenty of blood to work with.
Our Legendry’s are some of our best racers and we really want to capture that talent in these new lines.

We would have progressed a little further here however we hit a bit of a stumbling block at the start of the breed change as some horses incorrectly had breeding decay added to there foals.
Our first Z2 under the new change was affected by this glitch and something weird happened with it’s BA.
As a result we feel we can no longer trust that foal as an example of what the parents breed.
So we have bred a second Z2 from the same parents and are awaiting next weeks maiden tournament to try the foal out.
Once we know what we have the mad science can begin.

We will be breeding combinations of our Z1’s and Z2’s to see what works best.
The successful combinations will become our first Nak bloodlines.

One things for sure, we will certainly be starting a line that includes our Z2 “Nakamoto Girl” who has been a very solid performer in C1 tournaments as you can see in the image below.

By next month we will have a good idea of the direction these lineages will be taking and will share that info then.
Were having a lot of fun working out the right combinations and with breeding decay now in effect we have to use our good legendary breeds sparingly!

Other breeding conundrums:
So on to another handful of breeding related conundrums that have popped up with the algo change.
What to breed for our war chest, if and when we race our Z1’s and what will happen to Z1 stud prices?

Our previous plan for the war chest had basically been stack low Z Nak’s and Legendary Szabo/Finney foals to race and sell when we turn full time Zed.
With less random lotto ticket traits now being passed down to offspring it seems stacking these unraced foals from lightly or unraced parents is no longer a viable (or smart) play.
I imagine the ones we bred pre algo change will have good value down the track but see no point continuing that plan in this new environment.

Proven blood and success on the track will now determine which unraced foals sell and which studs are popular in the barn.
For example our new foal “Vital Sign” sold his 2 spare covers within an hour!
That would never have happened before and I put this down to his parents and early success on the track.
In comparison our unraced Szabo stallion failed to sell a cover in 7 days.

That said our unraced Z1 stallion still managed to sell both of his spare covers but we reduced the price to floor and it did take a few days.

I expect that to change as people realise that once they have stacked traits they will need a big injection of base ability for ultimate success and the strongest place to acquire that is from a Z1 stallion.
Unraced may not fetch anywhere near the price of a Z1 with great track form but high BA is in all Z1 stallions and that won’t change.

So to race our Z1’s or not to race our Z1’s is a big question we were not even really contemplating until now.
We aren’t in a rush to make a decision on this because the landscape can and will change but our thinking at this point is that in the future there will be Maiden races for very large prizes and if we do race them that will be when we do it.

So there has been much learnt so far but much more to learn going forward.
I hope you are enjoying the game as much as we are and finding success with your breeding.
Good luck with your bloodlines and thanks for checking in!