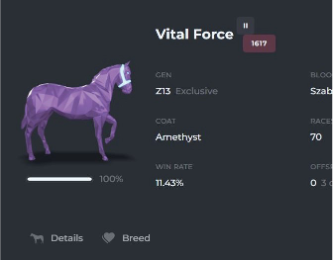 Hello my fellow Zed Heads,
Another month has passed on Novus Earth and we continue our breeding in search of magic formula’s and monster foals.
We haven’t been going nuts breeding this month, mostly sticking to the plan and breeding with intent.

Our Szabo line has progressed well.
Last month’s Z13 offspring “Vital Force” performed somewhat as expected.
Born with strong distance preference as a 1200m sprinter just like his parents he completed a decent discovery run, progressed to the Maiden Stakes semi final, ripped up C3 and C2 before winding up in C1.
Zed’s premier class turned out to be a step to far though and he now bounces between the top 2 classes.
A win or place in C2 followed by half a dozen mid to tail runs in C1, rinse and repeat. 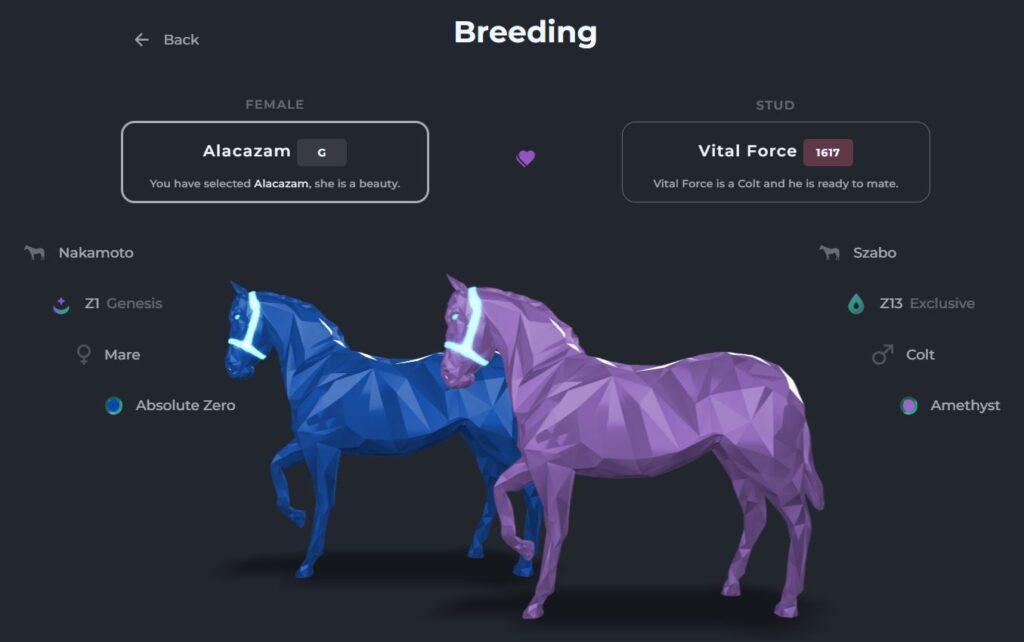 As predicted last month the base ability of Vital Force would be short of C1 expectations and it was so we have bred him with our special Z1 mare “Alacazam” creating a Z14 Szabo Elite named “Vital Victory”.
He started well in his first 5 races going  1/2/1 and making the A bracket KOW quarterfinal but took a loss there. (11th place)
Day two wasn’t quite as promising going 0/2/1 in his last 5 discovery races to finish 1/4/2 overall and landing in C2. 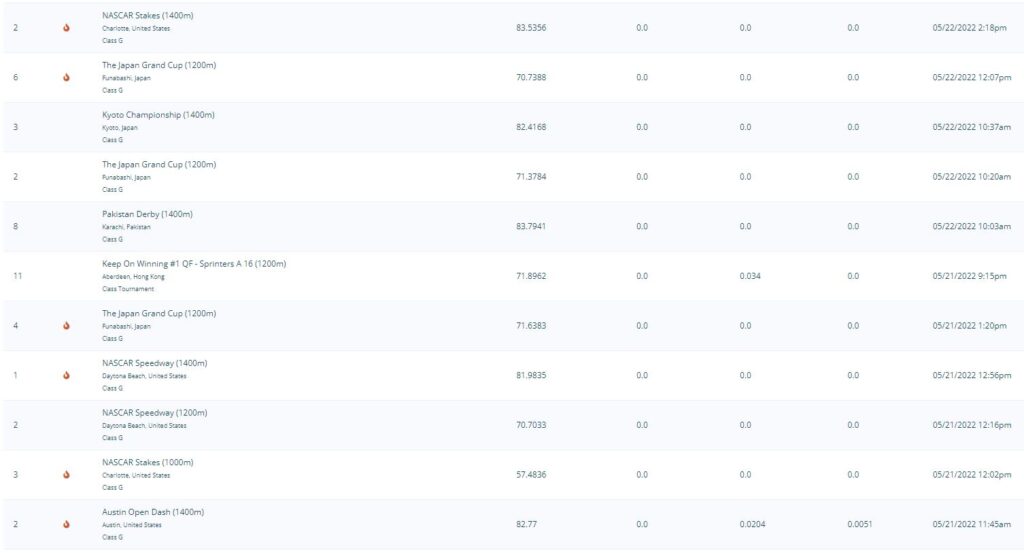 Post discovery it’s time for some C2 paid’s to see where he really stands.
Some in the sprint funnel and then a few in the mid funnel to find out more about his true base ability.

From here we plan to breed Vital Victory with the original Patriarch of this bloodline, our Z4 She’s Sensational.
“In-breeding” could very well be a thing in algo 2.0 and were curious on that front so this will be a handy test to check that out further.
Hopefully the combination of another base ability injection, another distance preference injection and the inbreed of the great grandparent will create some magic.
I’ll keep you posted on that experiment!

Speaking of She’s Sensational, last minute we also decided to test the combination of her and our stallion “Pinnacle”.
Prior to the breeding update this combination was producing foals with very high base ability, though little else.
With distance preference now a passable trait we hoped She’s Sensational would share a little of her talent with an offspring.

The match up produced a colt we named “Torque Of The Town” and the trend continued with the offspring coming out with very high base ability. (Almost base Z1 level)
From there he did well in discovery and was somewhat of a C2 monster with flames, results and a qualification for the Podium Plate but much like Vital Force who I mentioned earlier, he is a level below success in C1 and will likely bounce between C1 and C2 for now.

He is a very good horse though and once I’m more aware of the level of his distance preference he will be joining our ever growing list of good breeding stock.

Torque Of The Town – C2 stats.

As for the Nakamoto lines we were creating we have pivoted a little there.

As mentioned last month we wanted to test our Z1 breeding pair post algo to confirm what sort of Z2’s we can produce and the foal we created, “Regal Contender” was a great breed.
As you can see below he tore things up in C2 with a 35% win rate from 14 races.
Unfortunately the C1 wall was too big a hurdle and he struggled in the top class with just one win.
That said he proved beyond a doubt we can produce high level Z2’s from our Z1’s going forward. 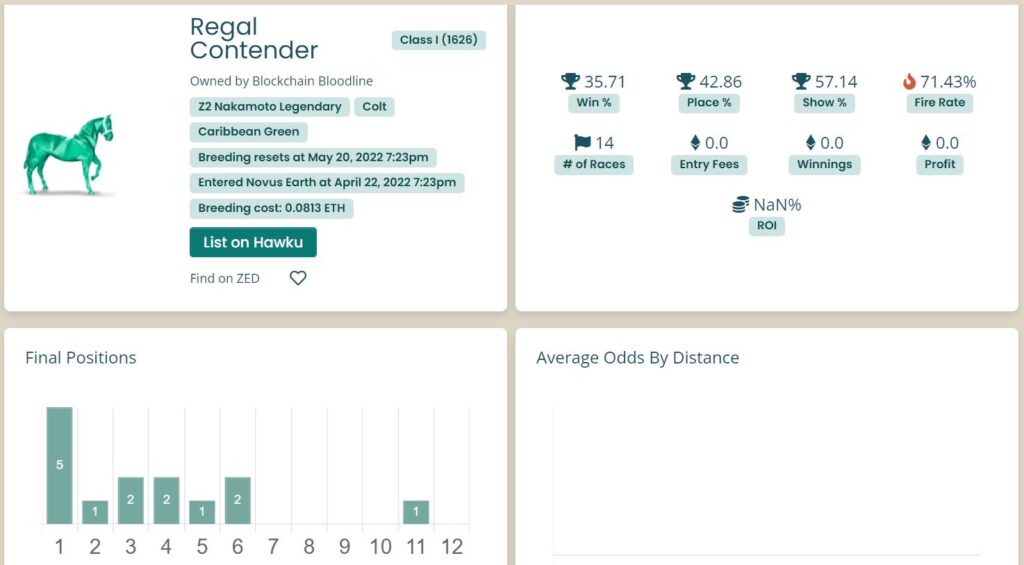 However the mix between our Z1 Genesis and Z2 Legendary horses doesn’t seem to be working as well as we had hoped and that is where the pivot comes in to play.
Our “Nakamoto Lines” will now be more like “Legendary Lines”.
I suspect either the Z1 pair’s distance preferences are crossed and it’s numbing the effect of the outcome or the combo has too much base ability and doesn’t leave room for the pass down of enough distance preference.
Either way we likely won’t be breeding our Z1’s with our Z2 Legendary horses going forward.

Instead the new lines will be created via combinations of our Legendary horses.
Stacking and compounding traits until the base ability degrades and then breeding the Z1’s back in to the line to re-introduce it.
As time passes we can create more Z2-Z8 Legendary horses in house along with some stud barn activity and breed deals to bring in various elements we need and to keep the gene pool fresh.

Our first batch just in time for next weeks Zed Run/Lucky Jack Maiden tournament will be a double breed taking our new inhouse Z2 “Regal Contender” and pairing him two of our best C1 Z2 sprinters.
We should be able to create some competitive Z4 Exclusive sprinters that will also be great breed building blocks for various future bloodlines or lego’s as Dan Shan calls them.

While were in the stud barn we also plan on breeding our Z5 Legendary Unyielding Mallon with a high distance preference Elite Szabo we picked up when the algo change came in to effect.
If all goes well this may end up as another building block and if not chalk it down as more 2.0 experimentation.
If you’re looking for a cheap distance preference injection we will have 2 spare covers so keep an eye out for “Vampire Legacy” in the stud barn at floor price.

Lastly we had to breed ourselves a Pacer to get in on the new Zed conditional Pacer tournament.
We managed to find a cheap $20 Pacer in the stud barn with pretty damn high distance preference at 2200m so we mated him with a mare we have that also likes the 2200m distance.
Being a Z144 it has plenty of ancestors so we named him “Bit Of This Bit Of That”.
It’s a punt here but fingers crossed.
Either way the tournament should be a lot of fun.

Well that’s our breeding for the past month guys.
I’m off the run our Pacer in a griffy! See you on the track!